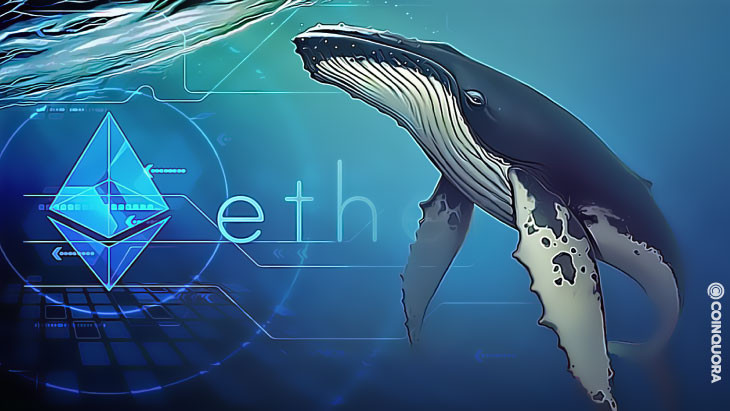 In the last 24 hours, Ethereum (ETH) has dropped by more than 8% in value. However, this motivated whales to invest more money into ETH.

As seen in the Whale Alert data, Crypto whales have moved around 400K Ethereum from the crypto exchanges. More than $445 million worth of Ethereum was dumped into multiple unknown wallets amid a price crash.

The data tracker revealed that whales transferred around 300k Ethereum (worth $333 million) from Upbit, a cryptocurrency exchange, to different wallets. However, the biggest transaction recorded by the tracker was adding $129.1 million worth of ETH from the same exchange.

ETH’s price has decreased by 12% in the last week, trading at an average price of $1,128 at press time. Surprisingly, though, its 24 hour trading volume is up 103% to around $11.9 billion. ETH’s market capitalization currently rests at about $137 billion.

Coinglass data reports that 66,704 traders have cashed out a total of $180 million from the cryptocurrency market in the past 24 hours. However, approx $40 million was withdrawn from Ethereum by these same traders. Moreover, 85% of all liquidations came from long positions.

According to recent reports, the global crypto market cap has fallen below $800 billion and currently hovers at around $795 billion. In the last 24 hours alone, Bitcoin prices have decreased by 4%, with the average price per coin now resting at $15,998.

The hacker who stole $600 million from the now collapsed exchange of FTX is rapidly converting the funds to Bitcoin, as reported by Coingape. It was mentioned that the thief successfully converted all stablecoins over to ETH; The total value of their Ethereum accumulation came out to be around $288 billion.